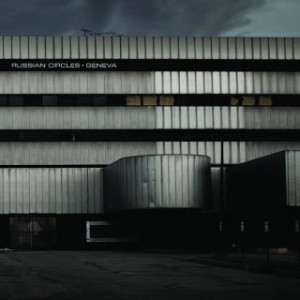 I’m a sucker for post rock. You give me a good post rock album and I’m probably going to fall in love and fawn all over it. I have no real explanation for my love for the instrumental rock genre but it’s there and it doesn’t seem to be going away. And there have been a couple of good records this year. Caspian, Gifts from Enola, Mono, Saxon Shore. And now Russian Circles have delivered one of my favorite this year. Instant love.

Geneva is excellent. The album starts with a weird pre-show orchestra string section/guitar feed back that is instantly appealing to my ears. Fathom is a driving almost doom metal type song with a killer bass riff that ends how it starts. That kicks into the title track, Geneva, which is more heavy goodness. I wouldn’t say that Russian Circles is a metal band, post metal or whatever it’s called, but they are definitely on the heavier side of the post rock genre. Think of Explosions in the Sky on steroids and mean. Melee is a slower moving song and more in line with what you come to expect from bands of the genre. Hexed All us a string/ambient piece that seems like an extended ending for Melee to move you into Malko, a song that starts with a fantasic guitar riff, that again seems in line with things I’ve heard from their peers in the genre but unlike the current generation of post rock acts, which some are very good, Russian Circles delivers with a harder edge and hits you in the face and to be honest is just better.

3 albums into their career and Russian Circles is farther ahead in quality then their peer group. When the Mountain Comes to Muhammad is a slow builder that only peaks at about medium spicey, similar to Caspian’s latest. The albums closer and longest track, Philos, is a slow builder into a crescendo very typical of post rock but very well done and is a great close to the album.

People who don’t get post rock might not care for Russian Circles as although they are better then most of what you’ll find in a genre slowly becoming crowded, they are still a band in a genre and plays to that genre. That being said Geneva is awesome and Russian Circle fans will not despair.