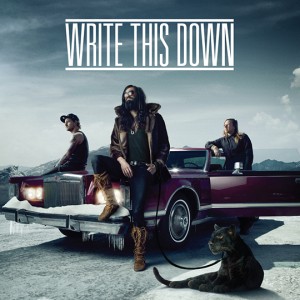 Imagine Emery, Anberlin, and He is Legend had a big band orgy and in the process created a less talented love child. Write This Down would be that love child. It might be a little unfair for Write This Down but their Tooth and Nail self-titled debut album is a mixture of power pop rock, emo, and a little hardcore. It might seem a little all over the place but it works on a weird level. In interplay between the singing and screaming is very Emery esque. The deeper screams remind me of HE is Legend and musically Write This Down is a cross between the high flying power emo the Anberlin is very good at and a more hardcore style the Emery plays.

As a debut it’s pretty solid. I had no expectations or ideas going into this record. But the record has flaws. The hybrid sound works and makes you want to hear more. But halfway through the record things change. With I Never Said That I Was Through With You Write This Down starts to move into a more straight forward emo sound and Center of Attention sounds like your bland radio emo from the 2000’s. Citadel a piano ballad that’s not very interesting for over half the song. The end of the song sounds like something Emery would do… only Emery would’ve done it better. Redemption, We Shot the Moon, and Kings and Kings And Councilors sound like b-sides from Emery’s last album, although We Shot the Moon has a very pop punk sing-a-along chorus. The album ends with Heaven and Hell, a short acoustic track. I’m not sure how I feel about this as an ending but for a record that’s kind of all over the place it kind of makes sense.

As a debut it’s a pretty decent start. I would love to see Write This Down going to the direction of the first 4 songs on the album because I think those were the strongest tracks on the record and I’ll be interested to see where they go from here.