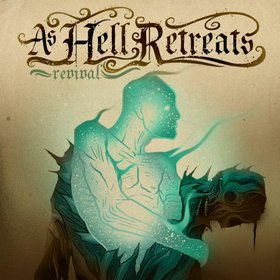 Strike First Records is the minor league team for Facedown and with that in mind it’s easy to say that Facedown’s future is going to be bright. As Hell Retreats isn’t a ground breaking band by any stretch of the imagination but they are playing metal in a good way.

Revival harkens back to Embodyment’s Embrace the Eternal. It’s not your standard death metal album and it feels wrong to call As Hell Retreats death metal. The album is only 9 songs long and clocks in at 27 minutes making it short for the genre but perhaps that’s what helps the album is stand out. The songs don’t become monotonous and dragging. The album leaves you wanting more. You’re going to hit the play button again on your cd player. That’s part of the charm with Revival. The record is just enough to get you interested and hooked without becoming bored, which could be real easy if these songs were each 6 minutes a piece. The production is done well and the drums aren’t offensive or intrusive., which can be the case on metal records.