Starflyer 59 – The Changing of the Guard 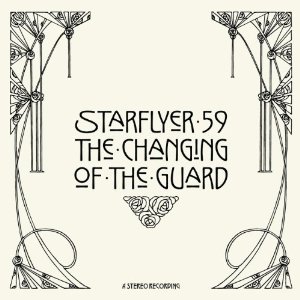 I can’t think of any band that’s been more consistent then Starflyer 59. For the past 17 years they’ve put out great music and although some fans have not been as pleased with certain albums in the catalog, I’ve always loved every release the band has put out. The Changing of the Guard is no different.

The Changing of the Guard continues in the same vain as Dial M and really the last 3 albums. It’s more fleshed out sonically then Dial M was. Like Dial M, Martin’s vocals are more upfront in the mix as the lyrics have become a deeper part of Starflyer 59’s songs. Although it seems like since Leave Here a Stranger the central theme of getting old has been ever constant. Only having a digital copy at the moment, I don’t know who else contributed on this album with Jason Martin. The drums are simple and almost understated, fitting in the songs perfectly, as if only to keep time well the lush layers of Martin’s guitars fill out the song, making me think that Trey Many is still handling the drum duties. The bass guitar isn’t upfront in the mix, but if you listen closely you’ll hear a steady rhythm and a couple of really nice bass riffs, so I’m guessing Stephen Dail played bass.

Musically it’s just a good indie rock record. Quality pop songs. Shane, Time Machine, and The Morning Rise/Frightening Eyes are great songs. Cry Me a River and Kick the Can are straight up rock songs.

It’s another 10 strong songs from Jason Martin and company. While it’s a shame that he’s not touring anymore it’s good to see that Jason is still writing and releasing music as Starflyer 59 and good for Tooth and Nail for keeping him on the label for the last 17 years.