Everything In Slow Motion – Phoenix 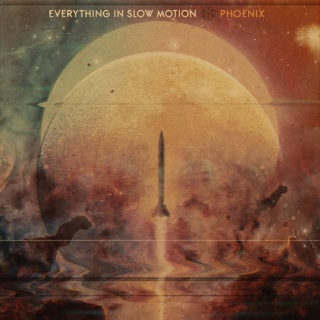 I was super bummed when Hands broke up. They went out on a high. Give Me Rest was a brilliantly perfect record. And that made the band breaking up even harder. But Everything In Slow Motion took the sting away. The band’s Red single that was released last year was a great glimpse at what Shane Ochsner was about to unleash. Everything In Slow Motion is the next logical progression from Hands, without losing anything that made Give Me Rest such a great record.

The band’s first full length, Phoenix, is every bit as great as Give Me Rest. But it’s different. At times Phoenix is heavier. At others, it’s more melodic. It doesn’t really have the ambient, post rock elements of Give Me Rest, and the intensity is different.

Get Out sounds like a classic Hands riff. And it has that same intensity. It’s a great song about how God’s love hold us, no matter how rotten or what vices we have. It sets the tone for the record. The finding hope and God in brokenness. Speak features Blindside’s Christian Lindskog, who’s voice adds a hauntingly beautiful tinge to the hook. The song is about wanting to hear the voice of God and not needed anything else from him. Poison continues the story of a user who wants to rest in God’s arm and put an end to his usage. The intro to Most Days slowly builds and then tails off before the verse kicks in. The song builds until the whole things comes crashing down, as the narrative of the story crashes. Most Days is about the tiredness of trying to hide who we really are from those around us.

You Are is where things turn. You Are is a declaration of God’s character and how he’s always been there waiting. It’s one of the truest worship songs you’ll ever hear. No matter how dark life gets, or how far we try to run away from God, he’s there. Numbers continues in the same vain. The songs ambient guitars carry the verse before the track explodes and then dies back down before exploding again. Ochsner’s voice, drowned in reverb, bounces around the song. The riff on The Fool is one of Ochsner’s best and creates something we haven’t heard from him yet. The Fool is a conversation with God about how awful our protagonist is and how God has never encountered anyone as bad as him. It’s the lie we tell ourself, that no one has ever been where we’ve been or done what we’ve done.

Come Down brings the heavy back.  It’s the inner monologue that one often has with God about where they stand. I love the line “Am I growing closer when it feels like failing.” It’s a beautiful picture of something I think everyone has experienced. Remember No More has another super cool riff that creates a sensation that a burden has been lifted right before the song crescendos. Remember No More is about exactly that. It’s the accepting of God and putting behind the old self. Proxima closes out the album, in a very similar way that Give Me Rest closed out the album of the same name. Light and airy. Beautiful. Proxima features vocalist Holly Ann, who adds another beautiful dimension to this worshipful closer. Unlike Give Me Rest, Proxima, grows and builds and crescendos, ending the album on a beautiful note.

Facedown Records waited to save the best for last. Phoenix is a beautifully complex record. The layers musically are well done and Ochsner’s lyrics again paint a picture of God’s grace and redemption. One of the best records of 2013.

Tagged as Everything In Slow Motion, Music Review