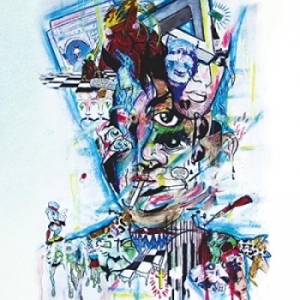 Hearing that the label had quite a bit of sway and say in the making and direction of Ad Astra Per Aspera, it made me want to give Alligator a listen. I liked Ad Astra Per Aspera well enough but it’s not like the record was a game changer. And knowing that Abandon Kansas might have something different to offer, makes Alligator an instantly more compelling listen.

Mirror is a dark note that kicks off Alligator. I instantly connected with the song, but Abandon Kansas wanted to make sure I was sold on the track so they invited Everything In Slow Motion frontman Shane Ochsner to sing the second verse. The song is simple, but the darkness and Ochsner’s unmistakable scream punctuating the track make it a compelling opener. It doesn’t give you an indication of what Alligator will sound like as a whole. but it’s a killer track. Alligator, the song, is similarly dark, but only as an undertone and not a theme. It’s got a great early 2000’s indie rock vibe. Yes, Ad Astra Per Aspera had these dark and “moody” undertones, it was subtle and the band felt reigned in. There’s a freeness on Alligator that I didn’t hear on Ad Astra.

Hope God Don’t Mind doesn’t sound like Grandaddy, but something about the synth line and the mix of upbeat happy go-lucky music with the darker themes in the lyrics remind me of Grandaddy. Baby Please is a fun rock and roll song. Anniversary is a downer of a song about the passing of another year since a divorce/breakup. The chorus is catchy, and even though the topic of the song is heavy, you find it stuck in your head. The band decided it was a good idea to follow-up a song about heartache with a song about addiction. Get Clean isn’t as quite a downer as Anniversary because the song is about wanting to overcome addiction. It’s a little bit of a jangley pop song. The way the band plays with the music and lyrics not always matching in tone is very reminiscent of what David Bazan has done so well for the last twenty years.

The band hits you with another great indie rock track (Shadows) and then offers up What You Meant. With the sound of the ocean in the background, What You Meant is just an acoustic guitar and vocalist Jeremy Spring. It’s not a bad song. But as I often complain about, it seems an odd fit on the record. It might have worked as an album closer, or maybe even after Anniversary. But where it sits on the record, it just feels weird. It feels like it should be the end of the album, but it’s not. In the age of Spotify and digital music, where every is buying singles and putting artists and albums on shuffle, it’s a small complaint. But if you bought the cd or vinyl version of Alligator, it’s minor things like track order that keep albums from being great.

You Oughta Know and One Foot In the Grave are both upbeat rock songs with darker themed lyrics. Both are solid songs, but after What You Meant, I find myself taken out of the record and not as engaged with these songs as I was with Alligator before What You Meant.

Alligator is a great record. It reminds me of the indie rock scene that I fell in love with after high school. But that one song is so distracting for me that I can’t give Alligator a perfect score. 4 out of 5 Stars.